Surgery number 7 – Complete.  Whew.  I do not think it matters how many surgeries your child has had, it never gets easier sending them into the OR.

Today we were extremely proud of Zack.  He was awfully brave.  Child LIfe met us before we even walked into Same Day Surgery to be admitted and it was someone Zack had met before.  He was happy to see her and show her some of his new games on the Kindle.  Unlike last time, he walked right in and got vitals without so much as a whimper.  That is progress people.

It appears that Zack has wonky veins and now requires the Vascular Access Team to place his IV.  I guess that means he is a really hard stick.  I know our nurses at Walter Reed already know that.  Today they had special nurses come with an ultra-sound machine to find his veins.  They said many of his veins were too little to hold a good IV. Zack did not care for getting his IV this way.  It might have had something to do with the vein that blew and the blood that was all over his arm.  Maybe.

When it was time to go to the OR Zack got a bit teary.  He said he could not do this again.  He said he was not going to go to that room again.  We finally got him walking towards the OR and he was really starting to have trouble holding it together.  His surgeon, whom he adores, heard him and came out and walked with him.  Zack was brave for her and did not fuss again until we got to the induction room.  Dr. D stayed with us and got her phone out to play games with Zack while the anesthesiology team snuck around and administered their drugs out of Zack’s eyesight.  Once he was asleep, we kissed him and off he went.

During “the walk”, Zack told his doctor about getting Braggin’ Dragons at school.  These are little slips of paper that recognize children for being ready to learn and using good behavior in the halls among other things.  Zack currently has 19 and when he gets to 20 he gets to go out to dinner.  Dr. D told Zack she was going to give him one for good behavior to show his teacher.  She is a woman of her word and a woman of many talents.  He came out of the OR with this on his ostomy bag: 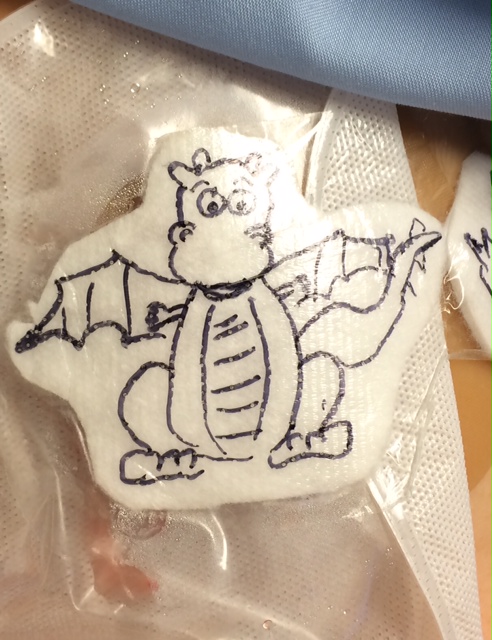 Because Zack’s colon had not been working, we had to do rectal irrigations each day to get his stool out.  It was a lot of fun and I bet you are jealous that you did not get to participate.  Anyway, we were not able to ever completely empty his colon like this, so the first part of the surgery was spent cleaning out his stool.  I am so glad I am not a colorectal surgeon or a GI.  They earn every dollar of their salary and probably deserve a lot more.

After that, the team placed his g-tube.  I learned today that the initial g-tube has a long tube while the incision heals.  After about four weeks his GI will change that to the little button that is mostly flush to his skin.  I am excited about that for Zack.  Zack also had another procedure that is private, but involved two more incisions that do not feel good.

Finally, it was time for Zack’s fourth and final ileostomy.  Just putting that out there Universe.  Do you hear me?  FINAL ileostomy.  No prolapsing this time.  No obstructions.  I mean it!  Happily, Zack’s surgeon was able to do the whole procedure laparoscopically.  This involved just one small incision in his existing belly button scar and then she was able to revise his old ostomy scar and use it for his new ostomy.  Our boy has a pretty scarred up abdomen, so we appreciate this immensely.

When we met with the surgeon afterwards, she showed us pictures of his colon.  They were not pretty.  His transverse colon was significantly enlarged and floppy taking up a lot of his abdomen.  The descending colon that we were irrigating looked better than the transverse colon, but only because we have been able to keep it decompressed through irrigations.  Even so, it still did not look like a normal, healthy colon.  That made me sad.

The experts here in Cincinnati do not have a good explanation for why Zack’s colon does not work.  They explained again that he acts like he has Hirschprung’s Disease even though he does not.  They said he falls into a small group of kids with dysmotility that they just really do not understand.  They believe his colon works fine until stool is introduced.  I guess someone forgot to tell his colon how to do its job.  I do not understand how that works, but evidently it happens….just not often.

Jim and I have come to terms with the fact that his colon is not going to work and that we may never know the reason why.  Actually, Jim has been at peace with that for some time.  I am still fighting against it, but I am getting worn down.  I told Zack’s surgeon that if his ileostomy fails again, I will be ready to take his colon.  Of course our hope is that his ileostomy will work.  He is due for a break about now.

I was hopeful we were going to have a peaceful night, but then his TAP block wore off. The TAP block is a nerve block in Z’s abdomen. Tonight has been spent trying to get itching under control from the pain meds, getting Zack to actually use his PCA for pain, getting loads of meds and trying to convince Zack all is well.  He is convinced that he will never stop itching.  The nurses have tried Benadryl and Nubain and he is still itching like crazy.  Sleep is overrated…..

Before the itching began…..

Some of you have asked about sending Zack ecards.  Here is the link for you.  He is in the Burnet Campus, Location A in room 439.

I wrote most of this a bit earlier.  This night has been particularly long.  It is now 12:40 and our trooper finally fell asleep.  I think I will join him.