Before I tell you all about Zack’s amazing day, a health update.  This last month has been rough on Zack.  His belly has hurt since his surgery and for no discernible reason.  He has been consuming a LOT of Tylenol and Motrin.  A lot.  The good news is that those medicines help with his pain and he has not needed to be seen for anything stronger.

He will tell you that his g-tube still hurts.  I am sure that is true, but nothing is visibly wrong with it.  Sadly, we think his keloid is growing back and that stinks.  In addition, he prolapsed 4 times last week alone.  Prolapsing hurts and gets in the way of things Zack likes to do.  He does not like that.  Last Friday we had an impromptu neighborhood picnic and he did not want to miss it.  He was in pain in the shower and mad about missing fun, so he took the handheld shower head and pushed his intestines back into his body.  Because why not?  That did not feel super great, so I don’t think he will do that again.  I hope….

All of the belly pain has meant he has not been eating much.  Because Zack’s doctor increased his feeds, he has not been losing weight which is good.  But he is not gaining weight at the moment like we had hoped.  Thank goodness for feeding tubes.

Enough of the medical stuff….

Zack woke up this morning at 6:20 a.m. ready to get on the school bus, which arrives at 8:27.  Why?  Today was the Special Olympics and it is one of Zack’s favorite days of the year.

Getting greeted by cheerleaders.

This year, several of Zack’s classmates and their homeroom teacher came along to be his cheering section.  As usual, they made some awesome signs, offered lots of encouragement, and were super kind to brave the extremely frosty morning. It was 38 balmy degrees and windy as all get out at 9:30 a.m. when they all arrived.

In addition to Zack’s classmates, Zack had several other people in his cheering section.  Mr. Tozer, his coach, has been helping Zack for the past three years.  He really knows how to motivate Zack to do his best.

Zack’s grandma and cousin, Kelsey, were there today as well.  Kelsey has such a kind and compassionate heart for Zack.  She also helped me corral him and that is a true gift given the amount of energy Z had today.  Grandma is one of Zack’s biggest supporters and comes to the Special Olympics every year.

Zack also had his buddy, Dan, there to cheer him on.  I’ve written about Dan before.  This young man truly has a gift with children and especially kids with special needs.  Zack lights up when Dan is around and is always asking when he can see him next. Zack also says that Dan is his best friend because he listens to him and is kind and likes to play Lego. His parents have raised an exceptional young man!

Some other fun pictures:

Zack and his buddy, Jake, getting their tennis throw medals.

Home with his adoring fans.

And that, my friends, is all the typing these fingers can handle for one day.  Have a wonderful weekend!

I promised my family more pictures of the Special Olympics.  I promise I have plenty.  First, let me lead with this awesome news.  Zack’s urine sodium level was 141 this week.  That is pretty spectacular considering how incredibly long Zack’s level was less than 10.  It is so good that Zack’s doctor is just about ready to pull his PICC line!  Zack still needs a bit of convincing.  He is worried about getting sick again and having to be “stuck a thousand times”.  The promise of being able to finally run around and climb at recess, learn how to swim, take karate lessons and enjoy an actual bath again are starting to win him over.

Now about those pictures…

Zack and the long jump.

Anxiously awaiting his medal. His lips even match his shirt.  He goes all out for fashion.

Is there anything better than getting your medal from an actual policeman?

Each child is assigned a buddy and this year Zack’s was Chailey.  She was amazing with Zack.  Here they are running the 100-meter dash.  Zack is being congratulated by his classmates.

Chillin’ with some of his cousins.

Another awesome cousin.  Zack had quite the cheering section.  Grandma and Aunt Becky were there as well as several friends. 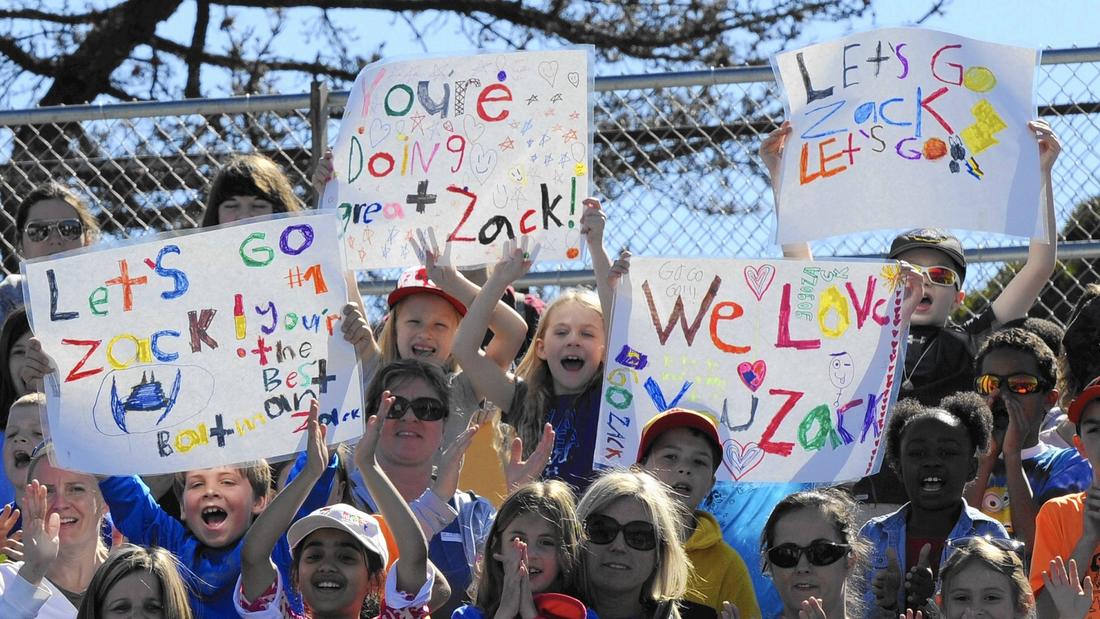 My favorite photo of all was taken by the Carroll County Times.  Zack’s school sent the entire second grade to cheer for him.  I absolutely love this photo.  It makes me smile.

I hope you enjoyed the pictures.  I also hope these pictures make you want to head out to the Special Olympics next year.  Whether you volunteer to help with the event or come out and cheer for your favorite athlete, I promise you will leave with a smile on your face!

Before I post a zillion pictures of Zack’s awesome Special Olympics day, I wanted to share a few things that I have been struggling with of late.  As you know, Zack has been a bit behind developmentally since birth.  All along his doctors have assured us he would eventually catch up.  I have always been concerned about this and wondered how they could be certain this would happen.  I tried to shake off the unease I felt whenever we were told this and told myself to be more positive.  I wanted it to be true more than anything.

Over the past few weeks, we have been getting some discouraging reports from school. Zack is now even farther behind despite being in school more consistently.  He is having trouble remembering things he learned last year and even more trouble retaining what he is working on this year.

I had a meeting with Zack’s teacher’s on Wednesday morning before the Special Olympics to address some of our concerns.  We received an email outlining the things they are seeing at school on Friday (I asked if they could write things down for us).  My heart has been heavy all weekend as I worked to process this new information.

Jim and I have been in touch with Zack’s Developmental Pediatrician.  She is paying close attention to what is going on with our boy and has recommended a full evaluation by a neuropsychologist at the Kennedy Krieger Institute.  This evaluation will be several hours long and include extensive IQ testing.  We are hoping to get a better sense of what exactly is happening.

My husband is forever the optimist.  He has pointed out that while some of the things we were told are certainly true, there are other things that are positive.  Zack is slowly improving in reading.  Zack is pretty amazing on his computer.  Most importantly, Zack is our son.  No matter what we discover, good or bad, we will continue to advocate for him and work to help him in every way.

OK, enough of the yuck.  Now for the good stuff.  Zack is doing well medically.  He is gaining weight.  His sodium level was amazing last week.  His stoma is not prolapsing.  I am thankful that his medical situation is finally quieting down.  Is it crazy that going three months without a medical issue is quieting down?  It gives us more energy to focus on his current learning situation.

I know you are wondering why I titled this post Special Olympics 2016 when I have not even begun to tell you about Zack’s day.  I honestly did not think I had so much to say. Sometimes writing it down helps me process my thoughts and feelings and I guess I needed to do that today.  I will not keep you waiting for the cuteness any longer.  Here are a few highlights of Zack’s day in pictures.  You are welcome.

Being greeted by cheering fans as he arrived at the stadium.

Taking in the opening ceremony.

My blog is not liking my pictures tonight and Zack and I have an early morning tomorrow.  I think I will end Part 1 of Zack’s awesome day here.  More cuteness tomorrow and no sadness.  I promise!

Explore the exciting world of someone else’s colon: